In the offices of Organization A, pandemonium has erupted in the war room. As line of business executives and IT administrators crowd into the CEO’s conference room, the office buzzes about the latest business disruption. Fingers point and voices rise. The problem likely won’t get solved for days, resulting in downtime and loss of revenue.

Meanwhile, the IT administrator at Organization B checks a new email from Hewlett Packard Enterprise (HPE) InfoSight, a Software as a Service (SaaS) platform that uses analytics to assess and predict problems before they happen. The email alerts the administrator that a boot drive is starting to fail and asks if the admin wants to fail it and replace it. The admin selects “yes,” and the situation is resolved. Organization B suffers no business disruption. 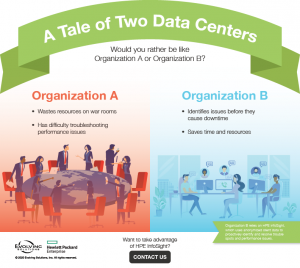 Data latency affects organizations’ abilities to operate smoothly. For a consumer-based business, data latency may impact the delivery of streaming video to a subscriber. Frustrated by the slow down, the subscriber dumps the service for one that promises to be faster.

Internal users at a business also face data latency ramifications. When an internal business user must wait to get data needed to close a contract and the data arrives too late, a revenue-generating deal may be lost.

HPE refers to the data disruption that affects organizations as the app-data gap. Contributing factors include system architecture, storage, configuration, interoperability, virtual machines and compute. Because each system has many potential trouble points, IT admins must constantly monitor for potential pitfalls.

HPE InfoSight provides the ability to monitor, detect and predict issues that affect an organization’s complex IT infrastructure. Originally developed by Nimble, InfoSight is an anonymized global database of data on infrastructure and applications collected from users over more than a decade. When HPE acquired Nimble in 2017, InfoSight incorporated data from HPE clients as well, adding the experience of thousands of users to the database.

Because InfoSight is SaaS-based, it has no infrastructure to deploy or maintain—all that’s needed is a secure connection from the data center to the InfoSight cloud-based instance. Once an organization’s environment is connected, InfoSight immediately begins gathering data from all the infrastructure components serving the applications.

InfoSight uses predictive analytics and machine learning to gain insights from anonymized data and alert users to potential failure as well as ways to improve the operation of the system. For example, InfoSight can survey the levels of performance of a specific email program across the HPE client base. By analyzing the infrastructure of better performers, InfoSight gathers data on optimal system configuration. InfoSight can advise a client with a similar configuration that a simple change in infrastructure could boost performance for the email program.

“We collect data for every client, aggregate it and analyze the correlations,” says John Duffy, category manager, Nimble Storage and StoreOnce, HPE. “We look at what one client is doing and use that learning to improve the experience for other clients,” he notes.

The Predictive Capabilities of InfoSight

InfoSight clients also appreciate the software’s predictive capability to alert them to potential issues. When InfoSight detects a problem in one organization’s system, its machine-learning models will scan the database, looking for other systems that could be affected by the same issue. InfoSight contacts clients with a predictive alert and provides a solution or recommendations on how to handle the issue.

The advanced monitoring tools and capabilities enable IT administrators to manage infrastructure no matter where it exists in the world. Further, InfoSight takes on many of the troubleshooting tasks that used to be done by an IT administrator, thereby freeing up that person’s time and attention. “I’ve had IT admins tell me that we’ve given them their life back,” Duffy says. “That’s a big compliment.”

Evolving Solutions can Help You Get Started

HPE InfoSight is storage-platform agnostic. Its portal has a variety of best practice guides and documentation for deployment for clients. While any organization can go it alone, some clients may want extra assistance with InfoSight to get the best possible results.

Where’s your business going? Accelerate your journey to digital transformation with HPE InfoSight and Evolving Solutions. Contact us today. 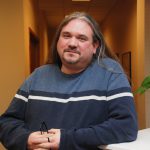