As anticipated, IBM announced the follow-on to the z14 ZR1 server, the z15 model T02. This class of server from IBM is designed to deliver the scalability and granularity required for small and medium-sized enterprises across all industries. IBM architected this server by building off the enterprise-class chipset introduced in the Enterprise Class counterpart known as the z15 model T01. It is interesting to note, the 19” form factor found in the z15 T01 was first introduced in the prior small and medium-sized enterprise-class mainframe server – the ZR1.

If you have not kept up to speed on mainframe technology, things have changed dramatically. The image below highlights what IBM’s latest Mainframe family looks like. The number of racks in the T01 model is a function of the size of the client configuration. The T02 will always be a single rack system. 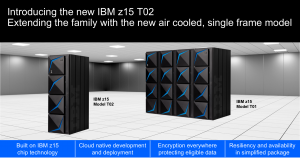 Due to the recent changes in our world, it is comforting to know that the mainframe is the most secure, reliable, available and innovative platform, and it continues to support the backbone of our economy. It is amazing to see the IBM Z enhancements made over just the last decade, as highlighted below. 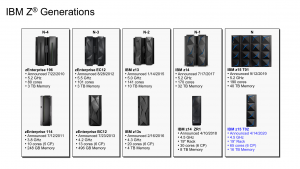 Mainframes have continued to see new innovations and technologies capabilities over the years. For example, you can see above how the number of cores and memory continues to increase with each server generation.

For those platform nay-sayers that claim the “mainframe is dead,” why are the memory and core numbers increasing? The answer is simple; it is because clients are still dependent on this platform, and their workloads are continuing to grow and demand more resources.

What a great technology story! The first IBM mainframe was introduced in 1964. It just goes to show you that the mainframe is a lasting technology and that IBM and its partners will continue to innovate on the platform, while still preserving its core values

Enterprise Modernization and the T02

During the uncertainty in our world right now, many states and their mainframe environments have made headlines.  Several states are scrambling to locate programming talent to scale their legacy mainframe applications which are written in Enterprise COBOL. These applications support the unemployment systems, which are seeing a dramatic spike in claim submissions.1  Having read these articles, there appear to be common themes – the organizations decided to no longer invest in the platform, complacency may have set in, or some organizations favored a workload refactor + re-engineering approach.  Organizations that embark on a transformation journey focus on the promise of reduced costs, improved customer experience and revenue growth. The challenge is none of those benefits are realized until the activity results in true Maintenance and Operation (M&O) of the refactored workload. That can happen, but it takes a concerted investment effort and time.

The graphic below demonstrates timelines for Refactor + Reenginer versus Mainframe Renew approaches. 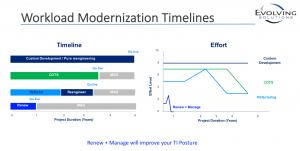 From the figure above, one can conclude that the last renew option offers the quickest path to “Go Live,” and the IBM Z15 T02 server is a cost-effective platform choice to support such an endeavor. For clients interested in learning more about this modernization approach, contact us. As a premier IBM Business Partner, Evolving Solutions offers both system build and Enterprise COBOL compiler migration services to ensure you are successful.

Turning our attention back to IBM’s announcement, this new server offers five hardware models and well over 250+ unique software capacity settings, providing a highly granular and scalable system. The base single-engine speed of 98 MIPS is found on the A01; the same full speed unit (Z01) climbs to 1761 MIPs, up from 1570 MIPs on the prior generation. The server clock speed held steady at 4.5 GHz, yet the average single-core performance increases 14% when compared to the ZR1. Also seeing increases are memory configurations and the number of cores available within a single system image for Linux-centric workloads. Docker Containers can be deployed natively on this system, and doing so would allow your microservices to access native z/OS services within the same LPAR. Talk about zero network latency!

The T02 server also includes key innovative features. One such feature is known as Compression Acceleration, and a second is Instant Recovery. Let’s briefly review both within the context of the T02.

As mentioned in a previous blog post, on-chip compression is the functional replacement of a formerly priced feature known as the zEDC (Enterprise Data Compression). An image of the NXU is found below: 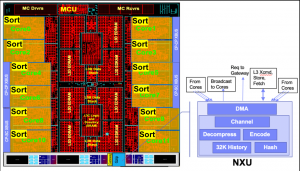 Unlike the zEDC Feature that was restricted to a max of 15 LPARs, the NXU can be shared by all LPARs on a system. Mainframe clients use this key feature to compress large files which reduces the amount of time spent moving data via I/O operations. In turn, this helps the organization optimize and often lower their IBM Software costs. This feature is a no-cost part of the IBM z15 server family, which will provide great benefits to mainframe clients.

To continue to improve the focus on system availability, another new feature, IBM System Recovery Boost, has been released.

According to IBM[i], System Recovery Boost is an innovative solution that diminishes the impact of downtime, planned or unplanned, so you can restore service and recover workloads substantially faster than on previous IBM Z generations with zero increase in IBM software MSU consumption or cost.

With System Recovery Boost, you can use your already-entitled Central Processors and zIIPs to unleash additional processing capacity on an LPAR-by-LPAR basis, providing a fixed-duration performance boost to reduce the length and mitigate the impact of downtime:

Let’s dive further into this. How does the operating system know you are shutting down one of your LPARs and that a shutdown boost period of 30 minutes should start? It’s quite simple. At shutdown time, the operator has to explicitly activate the boost by starting the new started procedure IEASDBS (Shut Down Boost Start).

Upon re-IPL of that same LPAR, Boost would be “On by Default” for that image, offering up sixty minutes of boosted capacity to get the operating system and subsystems up. During the Boost period time, workloads will also continue processing at an accelerated pace.

For those familiar with this platform, you know that zIIPs traditionally only host DRDA, IPSec and IBM Db2 utility workloads, along with non-IBM Software solutions that have chosen to leverage the zIIP API. During System Recovery Boost, if you have at least one zIIP engine available to the LPAR, it can run both traditional zIIP-only workloads as well as General Purpose CP Workload. IBM dubbed this capability CP Blurring.  Just like Speed Boost, zIIP Boost will last thirty minutes on shutdown and sixty minutes on restart.

What runs on the zIIP during the boost period? The short answer – any program!2

Evolving Solutions is ready to help

IBM worked with a multitude of clients during the design process for the z15 T01 and T02. IBM solicited input and design requirements for the base system, operating system, middleware and application layer. The end result is a modern platform with key innovations including On-Chip Compression, Native Docker Container Deployment, System Recovery Boost and industry-standard packaging.

If you are interested in learning more about the IBM Z15, or further explore breathing new life into your existing mainframe platform, feel free to reach out to the author on LinkedIn or via email. 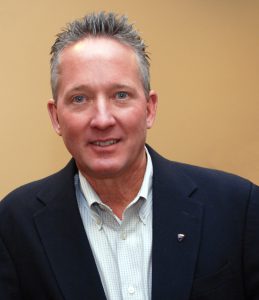 1 See Why New Jersey’s Unemployment Insurance System Uses a 60-Year-Old Programming Language at this URL: https://slate.com/technology/2020/04/new-jersey-unemployment-cobol-coronavirus.html and Wanted urgently: People who know a half century-old computer language so states can process unemployment claims at this URL: https://www.cnn.com/2020/04/08/business/coronavirus-cobol-programmers-new-jersey-trnd/index.html

2  See IBM’s zIIP Authorized Use Table for a description on what workload is allowed to run on zIIP processors.

That document is found here: ftp://public.dhe.ibm.com/systems/support/warranty/pdfs/aut/Authorized_Use_Table_09-2019_en_US.pdf

Jim is a Senior Solution Architect at Evolving Solutions and joined the company in 2016. Connect with Jim on LinkedIn here. 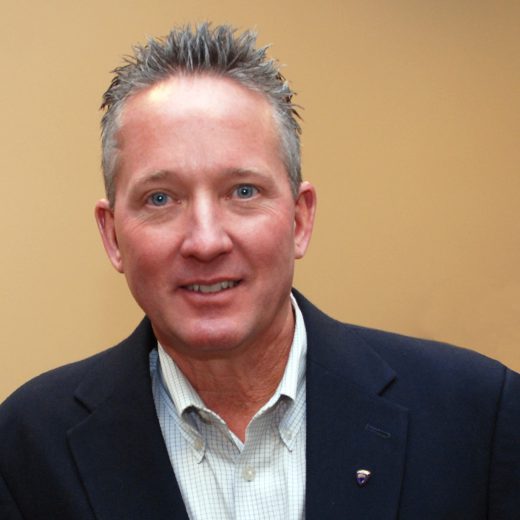 Today, we’re going to talk about the mainframe. Yes, that mainframe which hosts more transactions, daily, than Google; that mainframe which is used by…
Why consider migrating to COBOL Version 6.3 and what challenges await you? Did you know…. COBOL is a 60-year-old programming language that powers the global…
Are you ready to walk through the process of fully monitoring your Kubernetes, or OpenShift, Cluster(s) with Dynatrace? This article will give you the…