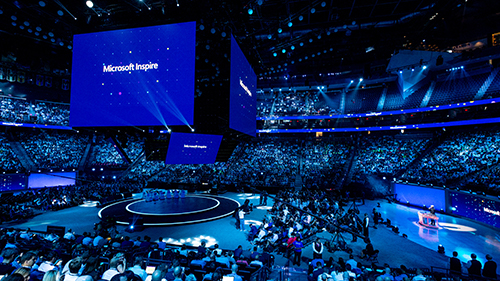 This week, Susanna Woods, Evolving Solutions’s director of sales, and I attended Microsoft’s Inspire partner conference. It was the first time Evolving Solutions has attended the conference and it reflects our continuing commitment to deliver hybrid cloud solutions to our clients.

Public cloud is not new news, but I believe we’ve reached a new phase of public cloud maturity. Each of the top cloud providers (Microsoft’s Azure, AWS, Google Cloud Platform (GCP) and IBM) has transitioned from evangelism to steady growth. The push by each provider to get client workloads, particularly data, onto their platform is certainly a continued theme. The conference was a great opportunity to better understand how Microsoft is innovating and continuing to differentiate their offerings.

Microsoft’s investments in Azure were readily apparent, as was their continued focus on Data and AI. They continue to lower the barrier to using advanced data capabilities, creating options, but also requiring important considerations on which platform is the best for an individual business. One of the most interesting items showcased was how Microsoft is using what they are learning from their Xbox and gaming business and incorporating it into their ability to make decisions on massive volumes of live data. Incorporating that with their investment in Mixed Reality through solutions like Hololens and Azure Spatial Anchors (provides persistence of a virtual world in the physical world) present several extremely interesting opportunities for innovation.

Of course, it’s not possible to get the business value from any of this innovation without adopting Modern Operations, the practices to ensure your end users and consumers get the experience they expect and need. I’m excited about some of the new Azure capabilities that provide components of this and I’m looking forward to the options they provide for our clients. If you have any questions about the conference or how you can continue to move forward in your cloud journey, feel free to reach out to me. 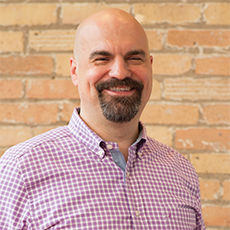 Michael joined Evolving Solutions in 2014 to develop solutions for our clients across hardware and software, both on and off premise. He brings over 18 years of creating architectures to solve complex business problems including big data, high performance computing, integration, automation and end user computing.

His broad technology, business and industry experience provides valuable perspective to our clients working to implement innovative technologies to support their success.

Cisco hosted their annual Cisco Live! Event this year in Sunny San Diego June 10-13. It was also the 30th year of Cisco Live! So there was much cause for celebration. It was a fantastic week with much to learn and see, over 25,000 people in attendance, and 350,000 square feet of World of Solutions and Cisco Showcase space for all the sponsors, partners, and vendors in the expansive Cisco ecosystem. The theme of the week was Build a Bridge to Possible, and it absolutely rang true throughout the weeks messaging and events.

Chuck Robbins kicked off the week with an engaging keynote “You Make Possible,” retracing the Cisco Live! History over the past 30 years, gave a special shout-out to the original Cisco Networkers crew that was in attendance, and discussed several product announcements. The implementation of AI and Machine Learning into Networking, announcements around CX, and the power of IoT were some of the highlights. AppDynamics also showcased on many levels, at their first Cisco Live! Following the acquisition. With so much focus on partner success, the relaunch of the SuccessHub is an exciting improvement which will help partners in their transformation.

Cisco also partnered with Give2Get this year in the Social Impact Zone, allowing all attendees the opportunity to give back to the community. There were many activities available to attendees throughout the week to build furniture, make blankets, food kits and hygiene kits which were then donated to local homeless non-profit organizations. The week closed with an engaging mainstage conversation on how to remain relevant in today’s world with Julia Louis-Dreyfus, continuing the You Make Possible theme from the opening Keynote. 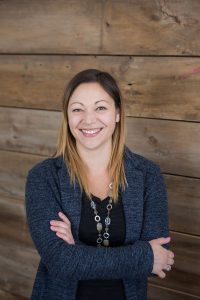 Angela is an experienced Sales Operations Manager with a demonstrated history of working in the information technology and services industry and joined Evolving Solutions in 2019. She is skilled in Research, Management, Customer Service, and Account Management with strong support professional with a Bachelor of Science (B.S.) focused in Women Studies from Minnesota State University, Mankato. 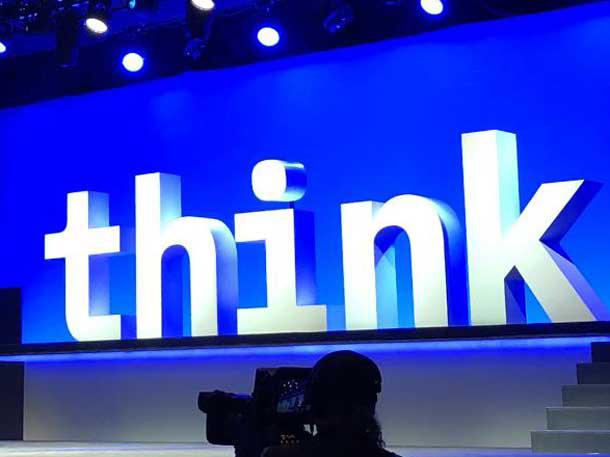 During the week of February 11, IBM hosted IBM Think 2019 in San Francisco, CA.  In addition to Think, the annual IBM PartnerWorld Conference was also held during the same time.  Hosting these events together saw almost 30,000 attendees descend on San Francisco for the week.

Evolving Solutions had several team members and clients attend the event.  It was an outstanding opportunity to learn about IBM’s 2019 strategic imperatives, new solution announcements and new channel program enhancements.  Additionally, the event afforded us the opportunity to network with hundreds of clients and IBMers from across the country.

As I reflect back on Think, there were several key take-aways for me.

Over the next few months, we will have Evolving Solutions team members at several of our other strategic partners’ premier conferences.  We will share our insights from those events on our blog.

I am looking forward to returning to San Fran next May for Think 2020.  Hope to see you there! 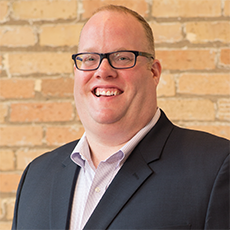 Bo Gebbie joined Evolving Solutions in January, 2017 as the Vice President of Sales, Services and Marketing. In this role, he is responsible for the sales, pre-sales services, post-sales consulting and marketing pillars within the organization. He is a member of the Executive and Management Teams, and represents the organization externally on vendor and partner Advisory Councils. 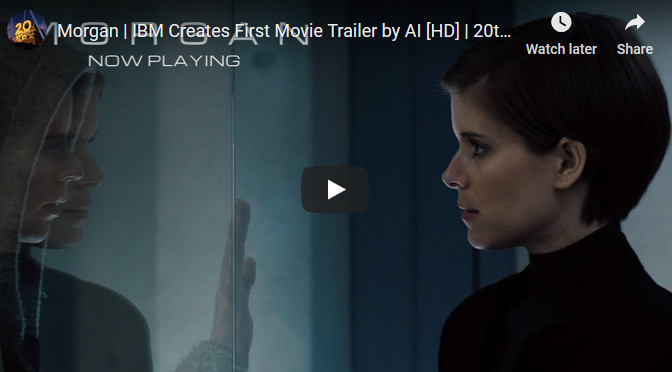 How do you create a movie trailer about an artificially enhanced human?

You turn to the real thing – artificial intelligence.

20th Century Fox has partnered with IBM Research to develop the first-ever “cognitive movie trailer” for its upcoming suspense/horror film, “Morgan”. Fox wanted to explore using artificial intelligence (AI) to create a horror movie trailer that would keep audiences on the edge of their seats.

Movies, especially horror movies, are incredibly subjective. Think about the scariest movie you know (for me, it’s the 1976 movie, “The Omen”). I can almost guarantee that if you ask the person next to you, they’ll have a different answer. There are patterns and types of emotions in horror movies that resonate differently with each viewer, and the intricacies and interrelation of these are what an AI system would have to identify and understand in order to create a compelling movie trailer. Our team was faced with the challenge of not only teaching a system to understand, “what is scary”, but then to create a trailer that would be considered “frightening and suspenseful” by a majority of viewers.

As with any AI system, the first step was training it to understand a subject area. Using machine learning techniques and experimental Watson APIs, our Research team trained a system on the trailers of 100 horror movies by segmenting out each scene from the trailers. Once each trailer was segmented into “moments”, the system completed the following;

1)   A visual analysis and identification of the people, objects and scenery. Each scene was tagged with an emotion from a broad bank of 24 different emotions and labels from across 22,000 scene categories, such as eerie, frightening and loving;

2)   An audio analysis of the ambient sounds (such as the character’s tone of voice and the musical score), to understand the sentiments associated with each of those scenes;

3)   An analysis of each scene’s composition (such the location of the shot, the image framing and the lighting), to categorize the types of locations and shots that traditionally make up suspense/horror movie trailers.

The analysis was performed on each area separately and in combination with each other using statistical approaches. The system now “understands” the types of scenes that categorically fit into the structure of a suspense/horror movie trailer.

Then, it was time for the real test. We fed the system the full-length feature film, “Morgan”. After the system “watched” the movie, it identified 10 moments that would be the best candidates for a trailer. In this case, these happened to reflect tender or suspenseful moments. If we were working with a different movie, perhaps “The Omen”, it might have selected different types of scenes. If we were working with a comedy, it would have a different set of parameters to select different types of moments.

It’s important to note that there is no “ground truth” with creative projects like this one. Neither our team, or the Fox team, knew exactly what we were looking for before we started the process. Based on our training and testing of the system, we knew that tender and suspenseful scenes would be short-listed, but we didn’t know which ones the system would pick to create a complete trailer. As most creative projects go, we thought, “we’ll know it when we see it.”

Our system could select the moments, but it’s not an editor. We partnered with a resident IBM filmmaker to arrange and edit each of the moments together into a comprehensive trailer. You’ll see his expertise in the addition of black title cards, the musical overlay and the order of moments in the trailer.

Not surprisingly, our system chose some moments in the movie that were not included in other “Morgan” trailers. The system allowed us to look at moments in the movie in different ways –moments that might not have traditionally made the cut, were now short-listed as candidates. On the other hand, when we reviewed all the scenes that our system selected, one didn’t seem to fit with the bigger story we were trying to tell –so we decided not to use it. Even Watson sometimes ends up with footage on the cutting room floor!

Traditionally, creating a movie trailer is a labor-intensive, completely manual process. Teams have to sort through hours of footage and manually select each and every potential candidate moment. This process is expensive and time consuming –taking anywhere between 10 and 30 days to complete.

Reducing the time of a process from weeks to hours –that is the true power of AI.

The combination of machine intelligence and human expertise is a powerful one. This research investigation is simply the first of many into what we hope will be a promising area of machine and human creativity. We don’t have the only solution for this challenge, but we’re excited about pushing the possibilities of how AI can augment the expertise and creativity of individuals.

AI is being put to work across a variety of industries; helping scientists discover promising treatment pathways to fight diseases or helping law experts discover connections between cases. Film making is just one more example of how cognitive computing systems can help people make new discoveries.